ARCTUS has already been involved in various projects that made intensive use of in-situ data and remote sensing imagery from various sensors. Click on “View More” button to acquire more information on some of the projects we have been involved with. 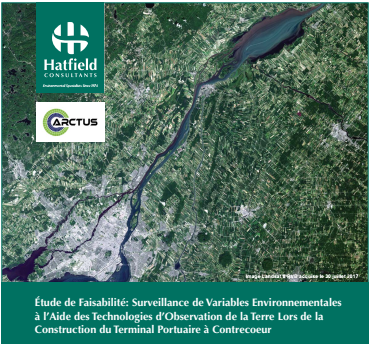 The Canadian Space Agency’s (CSA), Public Services and Procurement Canada (PSPC), and the Montreal Port Authority (MPA) contracted Hatfield and Arctus to conduct a feasibility study to identify Earth Observation (EO) technologies that would be the most suitable for environmental monitoring during the construction and operation of a new container port at Contrecoeur.

As part of the Sentinel-3 mission and in order to ensure the highest quality of products, ESA and EUMETSAT set up the Sentinel-3 Mission Performance Centre (S-3 MPC). ARCTUS will be the ESL responsible for the Algorithm Maintenance and Evolution of the Marine L2 products.

In december 2010, ARCTUS was contacted by the World Wildlife Foundation (WWF) and was requested services for their RACER project. The aim of the project is to use scientific tools to identify the regions in the global arctic where the recent environmental changes have the most important influences.